The foul call that will forever overshadow the Virginia-Auburn classic 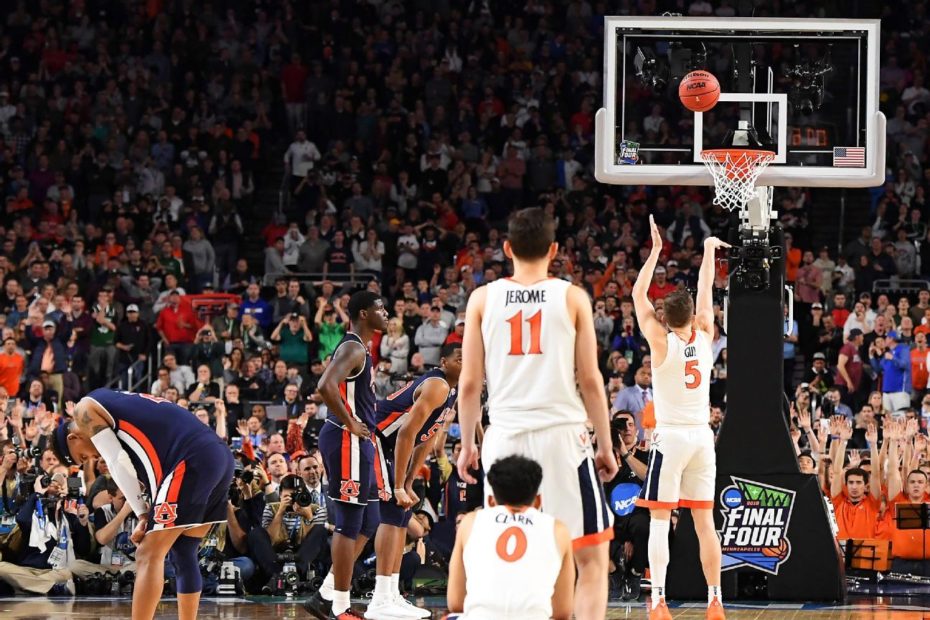 For three, maybe four seconds, Auburn thought it would be playing in the national title game for the first time in school history.

The Tigers, who launched an explosive run in the final minutes to take the lead over Virginia in the Final Four, embraced one another and screamed in unison after Kyle Guy‘s go-ahead 3-pointer over Samir Doughty‘s right-in-his-chest pressure clanked off the rim, and the final buzzer sounded.

But the cheers of Auburn fans quieted and became stirring boos. As the officials gathered and walked toward the monitors after the final buzzer, Virginia began to half-celebrate, while Auburn simmered. And that’s where this whole story gets crazy, as a missed double dribble with 1.5 seconds left and a foul call with 0.6 seconds left punctuated a stunning game.

What the hell had just happened? Is the game over? Was there a whistle? Did someone get fouled? This game can’t end this way!

“I thought we had it,” Doughty said in the locker room after the game.

“And then they made the call.”

James Breeding, one of the three officials at the Final Four matchup between Auburn and Virginia on Saturday night at U.S. Bank Stadium, called the foul on Doughty, who appeared to make contact with Guy on the 3-point attempt. Guy made all three free throws, and a desperation shot by Bryce Brown in the final minute fell short.

The emotions that followed depended on where you stood and whom you talked to in U.S. Bank Stadium.

A Minneapolis police officer shook his head, staring at the final score. One Auburn fan stood with his hands on his head, mouth ajar, for 10 seconds before he slumped into his chair.

Another Auburn supporter, who was seated in the family-and-friends section courtside, held her phone near her mouth and screamed.

“These refs on some bulls—!” she yelled.

At the postgame dais, Brown, who had fouled Ty Jerome with 1.5 seconds to play after the Virginia star double dribbled, respectfully disagreed with the call against Doughty.

“I just didn’t think it was a foul, but the refs thought otherwise,” Brown said. “Can’t go back and rewind it, so …”

His teammate Jared Harper said he questioned the call but didn’t believe it altered the outcome.

“I would just say that I think it was a tough call,” Harper said as Auburn coach Bruce Pearl put his hand on his star’s shoulder, “but that’s not where we lost the game, I don’t think.”

Pearl said he didn’t discuss the call in the locker room with his players.

“We didn’t focus on that,” he said. “We focused on how we were going to handle the defeat at Auburn: with class and dignity. There are lots of calls during the game. You’re going to get some, and some you’re not going to get.”

Pearl’s emotions began to show as he continued on.

Ty Jerome dribbles the ball off his leg and recovers it, then picks up his dribble again without a whistle being called.

After the game, Doughty interrupted a reporter’s question about the foul against him.

“So you’re saying there was little contact?” he asked.

The reporter admitted he had not watched the replay.

“I didn’t feel no contact,” Doughty said with bloodshot eyes. “I didn’t think I fouled him, but the refs thought otherwise. And like I said, I trust their decision, man, all the time. That’s why they’re [officiating] the Final Four. But I’ll get a chance to look at that myself, and I’ll judge it myself. I’ll be my own ref.”

But seconds later, as if someone else had actually made the previous comment, Doughty couldn’t help himself.

As the previously subdued Brown returned to the locker room, he also revealed his true thoughts on the final call: “The NCAA needs to get some new refs.”

In Virginia’s locker room, De’Andre Hunter said he and his teammates were confused by the postgame chaos, but when asked if he agreed with the call against Doughty, he smiled and offered a shot response: “Yes.”

In a postgame statement, J.D. Collins, the NCAA’s national coordinator of officiating, said the official made the right call because Doughty had entered the opponent’s vertical plane.

Auburn head coach Bruce Pearl says he doesn’t want the late foul on Kyle Guy to define the game and reflects on the Tigers’ run to the Final Four.

Because of all that, we might never revisit the brilliant action that preceded one of the most controversial finishes in Final Four history, as Virginia, which seemed to have the game put away in the second half, squandered a 10-point lead as the Tigers attempted, and nearly pulled off, a huge comeback.

“This will be a memorable game, and I’d like it to be remembered for a great game,” Pearl said. “Let’s not remember this game because of just how it ended. Let’s remember two teams that played really hard that only had 13 turnovers combined, didn’t shoot it very well because there was great defense. It had nothing to do with the sight lines or the rims. We missed a lot of 3s. We missed some open shots, but we played against a great defense. It was a great college basketball game.”

But then, the call came.

A collection of prestigious coaches — Jim Calhoun, Matt Painter, John Beilein, Tubby Smith and Bo Ryan among them — added their two cents after the game, too.

“It was a foul because he jumped into him,” one coach said.

But they all returned to what they believed was the real infraction: the missed double dribble call on Jerome as Brown tried to foul him with 1.5 seconds to play.

Had the officials made that call prior to Doughty’s foul, they agreed, Auburn would have regained possession and probably won. But Jerome said he thought the foul was the ref’s priority.

“No, the ref didn’t call a foul,” he said after the game. “[Brown] was trying to foul me on purpose. I lost the ball. He let that one go, so I didn’t think he was going to call anything else after that. I think the refs did a good job tonight. You’re not always going to get a perfect whistle. But they definitely did a good job on both ends tonight. It was a more physical game, and refs aren’t perfect just like players aren’t perfect.”

Added Pearl: “We were in a situation late where we had some fouls to give, and I knew there was a disruption there. You’ve just got to get on to the next play.”

Years from now, we will never remember the details of this thriller. The Cavaliers have advanced to Monday’s national title game, where they will seek to complete college basketball’s greatest postseason turnaround. Auburn will always be synonymous, however, with one of the most controversial calls — and non-calls — in NCAA tournament history.